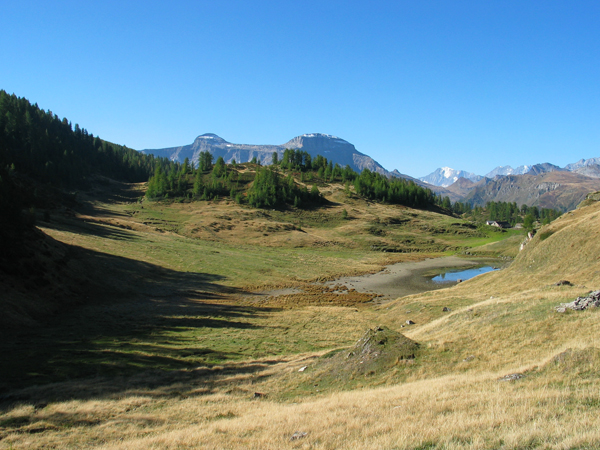 The Devero “Great East” is a roughly seven kilometers-long tableland on an almost flat surface at two-thousand meters of altitude: Alpine prairies, high-altitude pastures, abundant Alpine pastures of all kinds, grazing cows, snow lakes, and marmots. The Devero “Great East” is surrounded by the rest of the Devero mountains. The itinerary, which is one of the most famous and busy ones, is also known as the “Cheese Way”, given that these Alps are the area of production of the Bettelmatt cheese, a fat cheese obtained from whole milk which preserves the perfume of quality high-mountain herbs. The itinerary crosses six alpine pastures: Fontane, Sangiatto, and Forno are still full of grazing cows during the summer; Valle and Corbernas have been abandoned and its Alpine houses and stables are falling apart; La Statta used to be abandoned but the alpine pasture has recently been refurbished by the Devero Park Vigil and is now geared with water-pipes and a solar panel system so it will soon return to being operational.

The rural system of these alpine pastures is typical of these valleys: the cheese factory, where cheese is produced and the people who produce it live, separated by the stable. The largest stable of the Satta Alp (which measures twenty-two meters by six meters) is a testimony to what once upon a time was vital to the survival of local communities. All these communities were placed at the limits of the surrounding forests where, in particular at Satta and Forno, the wood used to produce the cheese used to be transported from the lower areas of land on the back of donkeys or mules.

From the parking lot in the Cologno area, before the second tunnel, take the path that goes back up to the great valley towards Forcoletta. Just before the crossing, turn right, cross the stream, and go back to the Fontane Alp. Behind the alpine pastures a path comfortably passes the rocky bastion and in a brief amount of time among several centuries-old glades and larches we reach the upper Sangiatto lake. We coast it and go down towards the Sangiatto Alp. Just before that we take the H18 path which cuts across the wide prairie on the side of the lake, we lightly go back up and thus come down to the wide prairies of the Corbernas Alp. From here on we follow with wide plain tracts keeping on the bottom of a small valley with nice peat-bogs up until we reach the Valley Alp (Alpe della Valle). Having crossed the torrent we immediately take the path on the left which via a long mountainside stretch goes up to the La Satta Alp (recently refurbished by the Devero Park Guard). Just before reaching the alp we cross the small torrent with and via one last intimidating uphill ascent we reach the great parries which amid small lakes, cotton-grass blossoms, marmots and grazing cows take us up to the Lower Forno Alp at an altitude of 2222 m, where we reach the H98 path of the classical Devero-Formazza traversal. As far as the descent is concerned, we follow the tractor trail which goes down to the Pianboglio Lake and Canaleccio up to the Devero Lake (also known as Codelago). Coasting the entire lake we reach the small dam and from here onwards in a brief amount of time we get back to Crampiolo and thus to Devero.