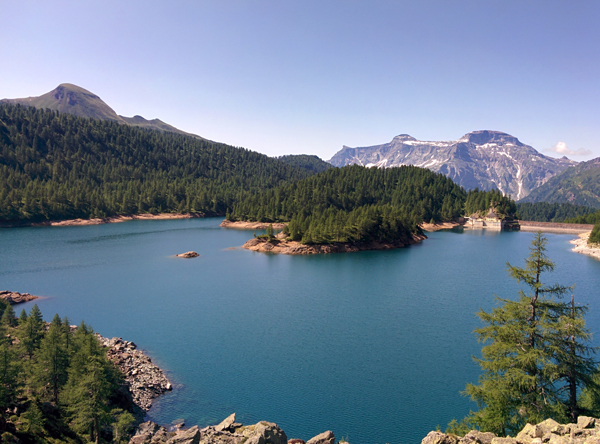 The track is one of the most classical ones in the Veglia Devero Park and offers glimpses which have nothing to envy among other landscapes in the Great North. The Codelago Dam was one of the first ones to be put together in the Val d'Ossola for the production of hydro-electric energy. The building of the dam, which took place in two consecutive phases, determined the raising of the former natural lake by 20 m; the lake formerly lied between the current dam and the wide Val Deserta promontory.

We start from the small Devero church in the Ai Ponti area, we proceed straight ahead, crossing the bridge on the Rio Buscagna and right away we take a right towards the very small wooden building which masks itself as an information office. We cross the bridge on the Devero Torrent and we thus go up along a long sheep road which after a while turns into a wide always-visible path with some stone-paved tracts which passes by Corte d’Ardui where the trail intersects the road which goes up to the Sangiatto Alp. We follow the track towards Crampiolo thus reaching the characteristic small village which in these years was subject to numerous refurbishment interventions of its stone and wood buildings. In front of the Crampiolo church we follow straight on, crossing the Devero Torrent and then following along the stone-paved road which takes us up to the Great Dam of the Devero Lake also known as Codelago. From the dam the path keeps on going across the mountainside crossing steep debris slopes at the bottom of Pizzo Fizzi: be careful as there is a danger of falling rocks, so avoid crossing here during violent thunderstorms. Once arrived at the middle part of the lake the path becomes lower, crosses a very nice glade, and reaches the bridge on the Rio di Valdeserta. We keep on following always along the mountainside up to a rather exposed track geared with small metal ropes. At the end of the barrier the path begins to go down steeply just to get back to the border of the lake, and once a long debris area has been crossed we reach the end of the lake. Following the posts labeled “Walk Around the Lake” we go back up a few meters and take a right thus crossing the Rio di Pianboglio on a small wooden bridge. The path follows on flatly coasting the lake up to another small bridge on the Rio della Satta from which we go back up steeply until we cross the Crampiolo – Forno Alp alpine pasture road. From here we follow along the road leading to Crampiolo, we then follow the Rio della Valle and keep on walking either along the road or exploiting a tract of path following on parallel to such road. The road thus carries us onto the small dam and then goes down steeply to Campiol. Just after the Punta Fizzi lodging house we take a path on the right delimited by a wooden fence and we then take the Vallaro path which goes down to the Cantone area, at the bottom of the Devero Plain, and following the road which goes around the plain we get back to the small church at Devero and following the road which goes around the plain we get back to the small church of Devero and parking lot.