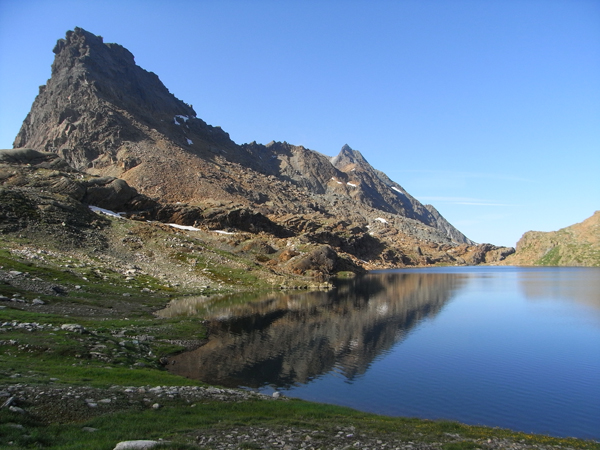 The Della Rossa Mountain Pass, also known as Geisspfad, is a wide valley of rocks allowing us to glance at the work of ancient glaciers which have left the signs of their flowing on these mountainous rocks. We’re in the realm of the serpentine rocks, a collection of green rocks which, due to their iron oxide content, take on a reddish color in the presence of atmospheric agents.

From the Devero Church we cross the plain up to the Cantone area where we take the path that coasts along the stream and start to going upwards along a not-so-step slope along great serpentine rocks which rise from the larch woods. In a very short time we reach the Campello prairies and once the last Alpine lodging buildings are passed the ascending path becomes demanding: the path ascends steeply via its numerous steps up until the Della Rossa Plains are reached. We take a right and once a stream has been crossed we start going up more strenuously until we come out right under the ramparts which carries the mountain pass on the Italian side which seems insurmountable. However, taking a better look, we will see a small iron ladder which allows a brief rock tract of the ramparts to be surpassed (be careful). Not much later we will finally reach the great rock tableland portraying some evident signs of glacial remodeling. Such tableland must be crossed by scrupulously following the varnished track marks portraying in order not to risk getting lost. At last we come to the Della Rossa Mountain Pass, distinguished by an infinite series of stone sign-posts. From the mountain pass we descend down to the side of the upper and larger lake, the Geisspfadsee; the other lake, the Zuesee, is visible from the mountain pass but not reached by this itinerary.

The path takes us down to the Manibode Plain (2026 m), dominated by an imposing waterfall which descends from the Geisspfad Lakes. Manibode was once covered by a lake which then dried up and the high Alpine pasture is made up of vast pastures found among encircling stone-fields and some sheds which are somewhat hard to spot due to them being distributed among great stones. At the end of the downwards slope we reach the bottom of the valley of Binntal encompassing the wide prairies of Fald and thus, following the road we reach Binn, which provides hikers with a series of harmonious dark wood houses laid down on steep and very green grasses.

This itinerary is a part of the Alpine Way (Blue Itinerary).

EE (difficult) - (for expert hikers). The track is always steep. The only place presenting relative difficulty is an 8 m iron ladder just before the Della Rossa Mountain Pass. The vast rock tableland just before the mountain pass must be traversed by scrupulously following the varnished track marks so as to not get lost.

red rocks which have been smoothened by glaciers at the Della Rossa Mountain Pass, the Geisspfad Lake, the Langenbach Mine, the Walser Architectural Buildings of Fald and Binn, and the Binn Museum.

the Devero - Binn traversal from the Della Rossa Mountain Pass is a stage of the Blue Itinerary Alpine Way.